Saw Fly and Tent Caterpillar: Chewing insects that feed on needle and leafs. 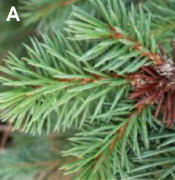 Infected needles may look yellow and mottled by mid to late summer and turn brown or purplish brown by late winter or early spring. Newly growing needles in the spring do not show symptoms while needles closest to the trunk of the tree (the older needles) are often discolored while the needles at the tips of the branches remain green. Damage typically starts on the lower branches and moves up the tree and after 3 to 4 years of severe infection the lowest branches may begin to die. 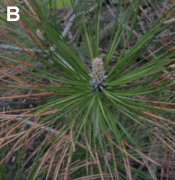 New needles are brown, short and often glued together with resin. Cankers are resin coated flattened areas on branches. Needles and branch beyond canker turn brown and dies. Tiny, black, pimple-like fungal structures on dead needles and pine cones. Infected shoots and dead branches occur throughout the tree but most commonly in lower canopy. Cankers and dead needles can appear rapidly after wounding from hail, drought or other stress. Olive to dark brown streaking in sapwood below cankers. 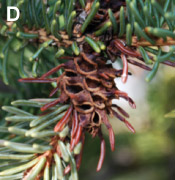 The eastern spruce gall occurs mainly on Norway and white spruce. This adelgid completes its entire life cycle on a single host. The 1/2 - 1 inch long green, pineapple-shaped galls are formed at the base of the new shoots. Galls formed in this region can weaken stems making them susceptible to breakage under heavy snow loads or high winds. Tree health is affected only if galls are extremely abundant each year.

We can be reached at 612.706.8210 for our office and [email protected] for our mobile team if your tree begins to show signs of infestation or chewed needles.

GET A FREE
ESTIMATE